If you only had one fly, what would you choose?

That’s the question I’ve asked of several of my favorite tiers around the Globe. The take up has been very encouraging, so much so I’m going to try and feature a different tier every now and again as long as I keep this blog going. I can promise you that a treat awaits!

The rules are, choose and tie the fly and answer a couple of questions – Thats it! simples.

First up is John Richardson.

John lives in the Village of Fallin, near Stirling in Scotland. His local rivers are the Forth and the Tieth, a stones through away from his home. He fishes both, but tries to fish the Tay as often as time allows and also has plenty of time under his belt on the Naver in the far north of Scotland.

What attracted me to Johns tying was his consistency which obviously comes from long practice and his lightness of touch in producing many, many salmon hair wings. Often with a slight quirk of his own.

His variations on the Franknsnealda phenomenon are many and wonderful, but interestingly not the fly he chose.

John learned his craft from a gentleman called George Flemming who ran a local youth fishing club introducing John and a few others to tying trout flies. Most of his friends weren’t interested but John took to it like a natural and moved to salmon flies quite quickly. As John puts it.. “fishing was in my blood and all my family were great men at it”

I asked John if tying flies was his living, his answer was “I wouldn’t say it was my living, more of a passion and I couldn’t live without it. The flip side is less time for fishing but I enjoy being involved in every aspect of the sport. Its the best pastime about, simple!”

John’s chosen fly is the Tay Raider, a Cascade variant that has done well for him and his friends on their local rivers. The ever popular yellow and orange colors are enhanced here with a peacock tinsel body.

Here it is.. tied by John

Hook.. as you wish

Silver tag with a glo-brite 5 butt.

Tail is mixed yellow and orange buck tail with a couple of strands of stretched pearl flash.

Body is Uni peacock mylar with a silver rib.

A wing of black fox body fur highlighted with more flash is finished with yellow and orange hen hackle, Jungle Cock and a shiny black head.

John has a few words of advice for new tiers, or any tiers come to that.. “I think good fly-tiers have it in them, and if I was going to say anything to a novice it is, be patient and try not to overdress, as little is very much a lot”

I should really give this up, wrapping bits of fluff on a hook for fun just can’t be normal

Normally I don’t go for hackle pliers. I prefer to use the ones on the ends of my hands. But now and again when wrapping small and delicate feathers I’ll admit I wish for a good pair.

Well, I think Ive found them. I give you Hackle Tweezers by Tyflyz Toolz (got to be from the US don’t you think?)

These simple little pliers are actually quite a revelation. Well made, grippy, robust but delicate and easy to use. I found them at Funky Flytying and for under a tenner they are a bargain.

Here they are set up for wrapping a right handed collar hackle faster than you can imagine. 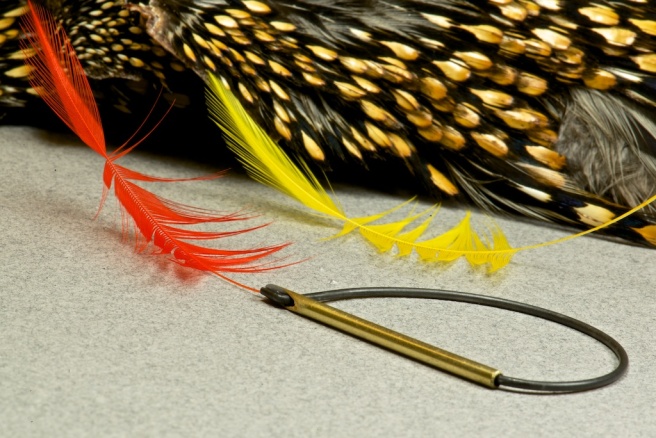 To sea boat crews, to mention the word “Salmon” is thought to bring bad luck to the boat and its crew. So the term “Cold Iron Man” or “Cold Iron” was coined to to avert disaster when talking about salmon whilst afloat.

I was recently asked to design and donate a salmon fly to be auctioned in Thurso (Scotland) to raise funds to help a friend of Eddy McCarthy (Head Gillie on the Thurso) recover from Breast cancer.

So here it is- The Cold Iron Shrimp.

Recently I’ve been playing around with some Shrimpy things. I really enjoy tying this style of salmon fly and I love mixing colour and materials within the style. This little batch of flies are heading to Russia this coming summer with my friend Rafal Kaminsky, I hope they do the business for him.

They are all tied on Partridge Code P double hooks size 6 (I genuinely believe there are none better) The colour schemes are loosely based around existing patterns such as the Green Highlander, Kinermony Killer and Cascade and they contain materials such as Boar, Nyatt, Shadow fox and Hen.

The following photo shows a little more detail of the construction with the mid wing and hackle. Orange Nyatt on the left, Sunburst Boar on the right.

The colours in the final fly in the series are based on a Green Highlander. One of the most classic of classic salmon flies. 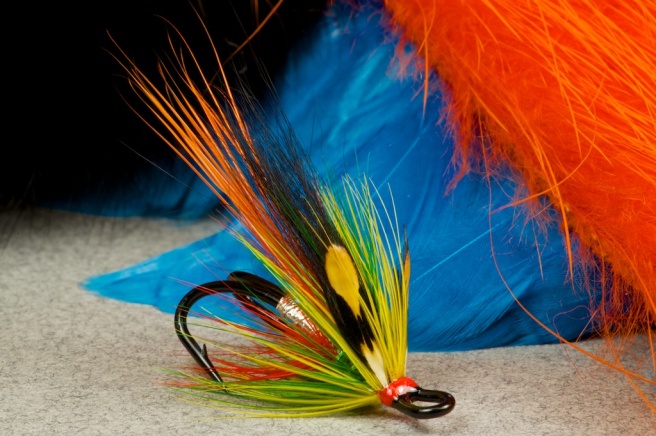 While I was tying these flies, somebody asked about how I construct and finish the heads. It’s quite simple……………

I use 50 denier GSP thread in white to tie all these flies. Its extremely strong, lays flat, is very fine and any colour on top of it is stronger in hue. It enables me to form a very small and neat finish to the fly.

I then use a different colour thread to finish the head. The brand is not important, only in the need for the thread to lay flat. Danvilles, UTC, Glo-brite all work.

This is Danvilles 6/0. I cover the white thread with two layers and build the shape of the head.

Finally I add one coat of Deer Creek Diamond Fine UV resin and cure with a UV torch. I find it easiest to put a small dot of resin on my thumbnail and apply it with a fine needle.

Paul J Beel recently contacted me for some photos and words on my flies.

The result can be found here.

I should really give this up, wrapping bits of fluff on a hook for fun just can’t be normal

This past weekend I was sent a small booklet authored by professional fly tiers Jimmy and Gloria Younger from Dumfries in Scotland.

Its called- “The Book” Salmon, Trout and sea Trout Flies.

Jimmy recently featured in the recent film by Eric Steel, Kiss The Water, documenting the life and work of another Scottish tier, the famous Miss Megan Boyd.

And a simple you tube search will come up with some interesting snippets of film of Jimmy tying flies. I love his trick with tinsel tags.

At first glance, this is a simple little book, black and white with a scattering of hand drawn sketches. A few pages in however, and you realise you are reading the wisdom of many years experience behind the vice.

I was instantly hooked! Jimmy, or is it Gloria? takes us through the basic tools, materials, proportions and techniques needed to construct a hair wing Salmon Fly with the occasional gem along the way!

On fly tying Vices…” In the USA, a fly tying vice is known as a ‘vise’, so that there would be no confusion between the two when in print. Over here, we don’t bother about this, as most of us can tell the difference, at some time of the day, at least”

On Jungle Cock.. “I firmly believe that the addition of Jungle cock cheeks make all the difference to a fly, but only from a sales point of view”

Delve further into the book and uncover a treasure trove of dressings for those 350 salmon and sea trout flies, many of which are new to me and I suspect are local to Jimmy and Gloria and in some cases designed by or for particular clients.

This is where the true worth of this book lies. Patterns such as the Caroline Scott, Eskimo Nell, Lord Louis Shrimp and the Sporran grace the pages with the more familiar Stoats, Ally’s and other traditional Scottish fare. It’s a wealth of ideas and possibilities.

On page 40, I came across the McConomy’s Goat, a dressing that sent me straight to my Vice.

Here it is, I think its a beauty!

If you get a chance, pick up this book. You wont regret it.

Well its popular in the Cinema as I understand it…..

When the wife is away, the boys go to play
and the Mastercard funds all things nice.
Plain envelopes, no receipts and no questions asked.
You don’t have to ask the man twice.

As gently restrained, and not by the LAW,
lay the soft curves of a Grip 2701.
Lightly waxed, a smooth bed of silk,
it’s just the start of this evenings fun.

Stripped, plucked and wrapped to his desire,
With a little whipping for good measure.
The lust in his eye for those fine Irish dyes,
reveal the depths of his deprived guilty pleasure.