It’s not often that a fly pattern makes such a huge impression on me – but this unlikely looking bug (at least to European eyes) has done just that. And I apologise to my Canadian and North American friends who will be yawning just about now.

While classed as an important group of patterns in the Maritimes, Im pretty sure that over here in a world of Shrimp Flies and Tubes of all shapes and sizes, this style on it’s unassuming single hook and unconventional looks has gone pretty much unnoticed by many. Though I have heard rumours about this fly scoring on a certain Scottish river.

First designed and introduced by Lee Wulff, this pattern offers a very different silhouette than any other salmon fly and is designed to be swung high in the surface. The original used a melted plastic body that was used to seal in and trap the hackle. The picture below is of an original Lee Wulff Surface Stonefly pattern from the early 80’s and shared courtesy of a friend of mine Per Stadigh. It illustrates just how much the original has changed over the years. 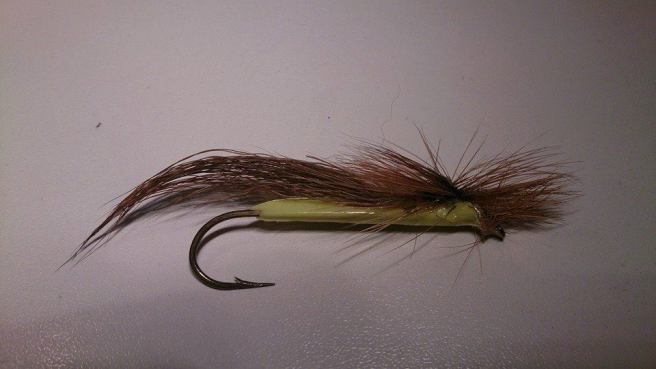 There are a whole assortment of variations out there, some with flash, some with foam bodies, different coloured hackles etc. The common component between most of them being the method of attachment of the hackle. In most cases this being a bent pin with a retaining bead, though I have seen examples using a heavy Mono or Fluorocarbon post with a melted end to retain the hackle.

Bright Fluro Green body with a black wing seems to be the common theme though there are versions with white over wings etc. Hackles I’ve seen vary from grizzle to badger in all sorts of qualities.

The version I’m going to describe is called the Paul Carron Stonefly and is based on examples I’ve fished with and conversations with David Bishop, President of the Gaspe Fly Company who introduced me to the pattern and manufactures the fly commercially.

Body- Fluorescent green floss, built up to a cigar taper and strengthened with a coat of “Hard as Nails” which also tends to deepen and hold the colour.

Wing- The original used dyed black bucktail taken from the centre part of the tail that would be brown on a natural tail. This hair tends to flare less and is more manageable. The wing on the original was mounted to flare flat over the top of the shank rather “than tied in the round” like a standard hair wing. I guess to provide more support on the surface action on the swing. In this case Ive used black squirrel.

Hackle post- The butts of the winging hair are posted. Im sure this is an important variation as its lighter in weight than the pin and bead method. And just as secure it seems.

Hackle- On the examples I’ve seen they have all used Silver or Blond Badger. Personally Im not sure of the importance of this and as you can see I’ve used a Dirty Badger, as it was the only similar hackle I had to hand in the correct quality and size.

As a note on hackle, although I didn’t discuss it, all the examples I saw used excellent quality, stiff and sharp hackles, similar to those you would use on dry flies. 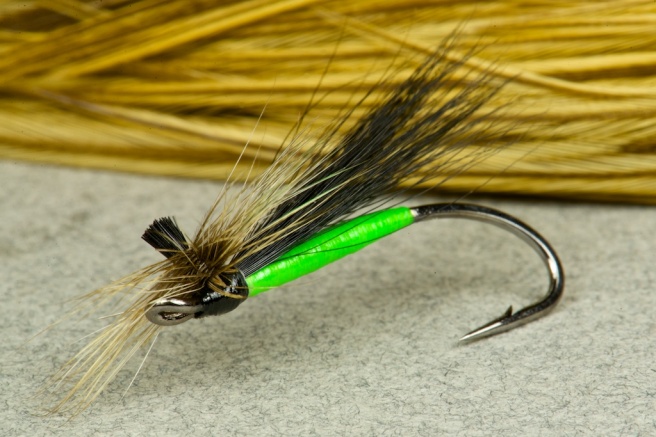 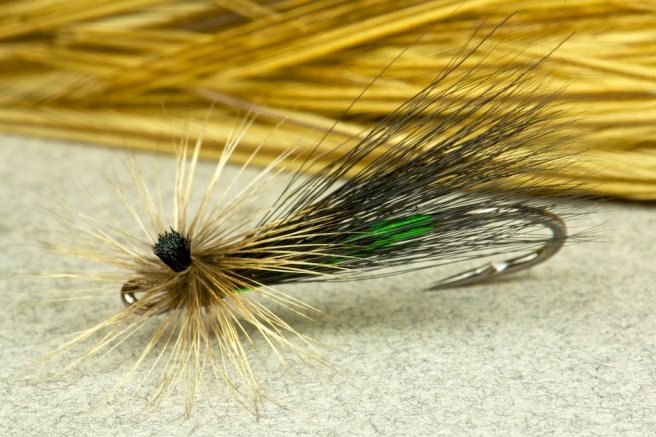 It’s important to attach this fly in-line with the tippet to keep it tracking in the correct attitude, a double turle knot being perfect for the job. Apart from that, as far as I can see, its fished down and across just like any other wet fly (though Ive heard mention of greasing it and fishing it dry, maybe thats why the hackle quality is there?) Depending on the weight of the current, it seems to either fish just subsurface or is very visible tracking in the surface. Not unlike a hitched tube but less pronounced. More subtle perhaps.

The takes are very visual and heart stopping, explosive in the surface with fish boiling at the fly. On several occasions recently, I’ve experienced a fish coming to this fly repeatedly before finally hitting it hard. Wonderful fun!

When we finally get some water I’m going to give this fly a serious tryout on my local river (the Usk, in South Wales) Im really looking forward to that and I have all sorts of variations floating around in my head that I’m going to try on the Towy for Sea Trout this summer.

Mainly I’m thinking black and silver with a little flash (well I would, wouldn’t I) – Its just got to work!!

I should give this up, wrapping bits of fluff on a hook for fun just can’t be normal.

It only took an afternoon find the big fish! I’d searched the beat and run a Copper Mepps through its hidey hole. From my position on a high bank, I’d observed a fish lazily following my offering only to turn away at the last second. I logged it away, Salmon or Sea Trout I couldn’t tell, but it was was a good one and I knew exactly where it lay. 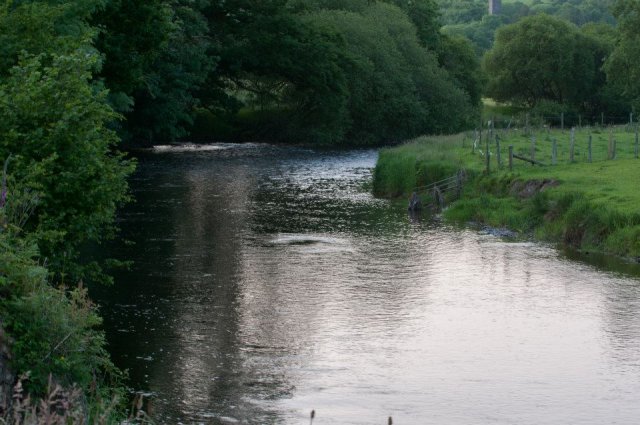 Where the big ones live

There were 3 other big fish I’d marked in the area. In another pool downstream, an almighty splash in the middle of the night before had given one away. The other two however, were in a magnificent pool that marked the no mans land between ours and another beat downstream. Saved for desperation stakes, but it’s just not “cricket” to venture onto someone else’s water, even if there is a fine dividing line. 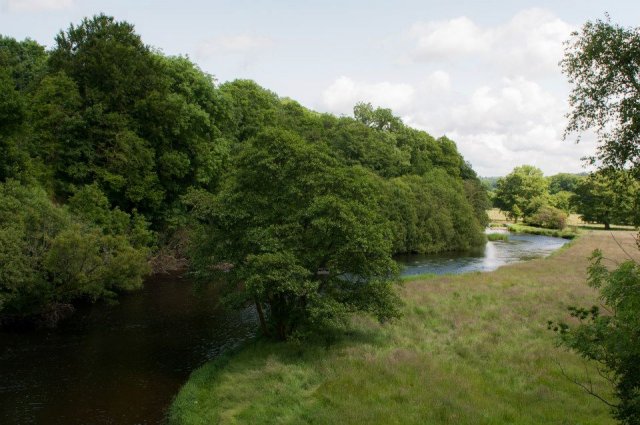 We’d enjoyed a late dinner and a few glasses of wine but the evening was passing slowly. Late night TV was blearing from the other room. The guys had got addicted to “Bitchin Kitchen”. I don’t think they were interested in the recipes, but they had been away for a few days and she was very easy on the eye.

I got my head down and stole an hours shut eye.

It must have been around midnight when we finally got going. The full moon that had been threatening us for the last few nights was finally with us. I’d been preying for cloud cover but as we walked down through the fields our shadows followed us as if it was broad daylight. 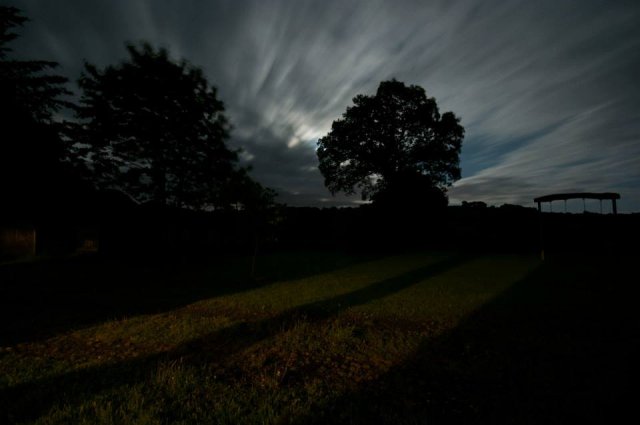 Shadows in the moonlight

I’ve been out on better nights, but the boys had traveled a long way for this chance.

The river was quiet, nothing moving, dew already fully formed in the long grass! The chance of a river mist increasing by the second, something else to add to the list of no-no’s that plague your chances of a Sewin.

No need for lights, we found our way upstream to the pool with the big fish and the tree lined north bank. There would be a shadow there. Indian file, the loudest noise an owl screeching somewhere in the distance and the only visible light at the porch of our cottage.

You see? these fish like it blacker than a witches heart. It’s a fine time to fish and an intense experience. You have to experience it to understand how guys can get addicted to this. 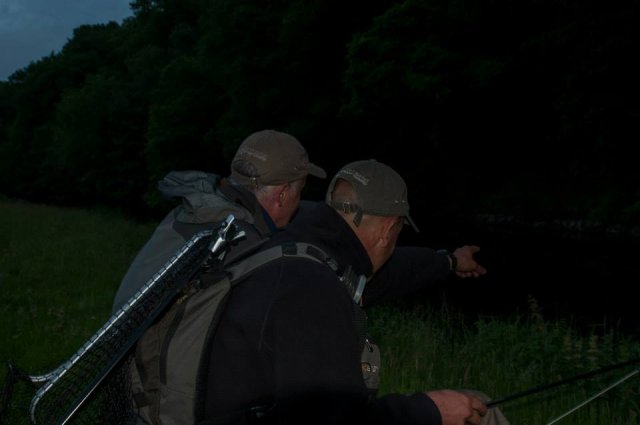 Blacker than a witches heart

And this was a private beat in the Tiefi valley in high season, a Mecca for us kind of guys.

The night was getting cold but the mist hadn’t quite formed as Josh threw his first cast with a black and silver fly. He let it swing over pool whilst I found a comfortable spot in the bushes. I sat back to watch, pulled up my hood, smoked a cigarette and promptly drifted off into a deep sleep.

I don’t know how long I was there before a loud shout of “Fish On!” had the same effect as a bucket of water thrown in my face. First instinct was to light the scene and I saw Josh’ rod bend deep into the butt, the fish splashing heavily in the surface. The sound, hugely magnified by the still night and the depth of the pool.

This was the fish of a lifetime! Please! Please! Don’t let it get away!

Jesus Christ! I left the net in the cottage! Luckily the fish swam towards Josh and as much as I wish I could regale you with a tale of a long and heroic fight. My first instinct was to jump in the water and make a grab for it. My hands cradled around her belly and the wrist of the big square tail and we had her.

It was only then, I realised the other two guys had walked upstream in time to witness the whole event and luckily, between us, we found a camera and tape measure. As our lamps lit the scene with an artificial glow, I had to look twice, between the camera flashes, to confirm that it actually read 82cms, a touch over 32 inches. 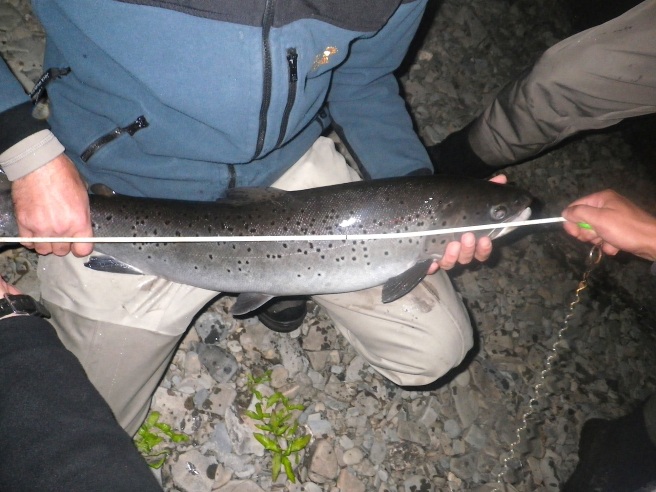 It took Josh a few moments for it to sink in. He was on his knees cradling the fish but I had to ask him the question. Around here, there are no rules other than the fish was his to with what he wished.

“Take her or let her go mate”? I asked gently.

The struggle was obvious in his eyes, a moment of darkness, quickly suppressed as he stepped into the water and sent her on her way. A powerful flick of that big tail and our lights lost her in the depths. Good man!

As Josh quite aptly summed up the whole event. “Mission accomplished!” 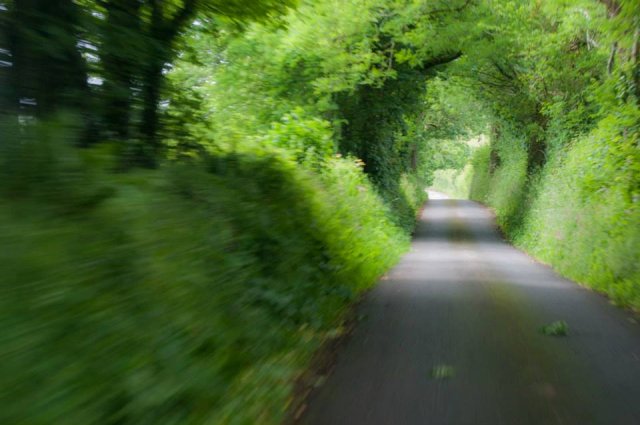 The way back home